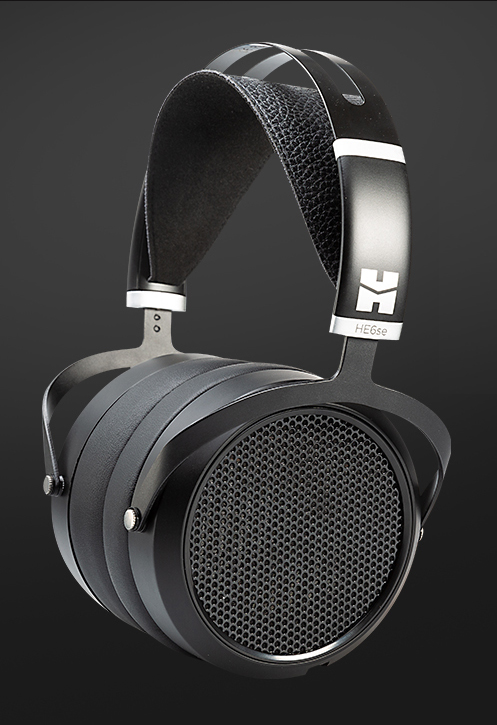 After seeing my review of the Dekoni earpads for the Spirit Torino Twin Pulse headphones, Dekoni decided to send me earpads for my HiFiMan HE6se headphones, which I saw as a great opportunity to not only review the earpads but the HE6se themselves.

Earpads are one of the least expensive ways to upgrade not only the look and feel of your headphone but the sound also. In fact, by selecting different earpads for different occasions you can often eliminate the need for multiple headphones to accommodate different music genres.

HiFiMan HE6se Planar Magnetic Headphone is a refined reissue of one of HiFiMan’s most popular headphones. While I admit that I acquired the HE6se for their well-earned reputation for being hard to drive, their epic sound quality sold me very quickly making them one of my top three reference headphones

In appearance, the HE6se is little changed from the original HE6, the same circular open-back planar magnetic earcup design, but the build quality is vastly improved, especially the “Hybrid” headband, which features a leather free-floating headstrap attached to a spring-steel headband with adjustable extensible steel earcup anchors which affords excellent clamping at a much lighter weight and better adjustability than the original. Another improvement is the detachable headphone cable that comes equipped with a four-pin balanced XLR connector and an adaptor for 1/4” single-ended TRS connections. The dual 3.5mm TRS connectors at the earcups make for easy aftermarket cable swapping though one might be tempted to stick with the Crystalline Copper/Crystalline Silver cable that comes with the HE6se.

In other words, they have taken the award-winning classic and simply upped the game making it a solid contender against any of the current offerings and with the current wealth of high output headphone amps, (HiFiMan recommends at least 2 Watts, to which I would add is best achieved with a triode tube amp, the bulk of which meet these power requirements, due to the extreme high-end extension of the HE6se) one could easily put together a world-class reference system for the price of many reference headphones.

Though similar in appearance to the HiFiMan HE6se’s original earpads, the Dekoni Elite Series earpads are slightly thicker than the HiFiMan originals and all, with the exception of the Elite Velour, are made from real sheepskin as opposed to Pleather (an artificial leather) which is used by HiFiMan.

After spending some time listening to a couple of the Dekoni Elite Earpads, I decided I needed to go back and do some basic evaluations of the HiFiMan HE6se so you have a frame of reference for my impressions of the performance changes. I will note at this time that changing the pads is not a simple process as it requires extensive manipulation of the mounting ring (there are four outward-facing plastic tabs that have to be slotted into notches on the driver faceplate), but with practice, it only takes a few minutes.

I began my listening test using my iFi Pro iDSD driving my two Questyle CMA 800R amplifiers (in dual mono balanced mode) but discovered that the Pro iDSD in high gain had sufficient power to drive the HE6se which benefited from the added musicality of the tube amp.

Consulting my regular playlist I began with “Can-utility And The Coastliners” from the Genesis album “Foxtrot” (DSD) because it tells me a lot about bandwidth (and having lived with the HE6se for several months now I knew that was their strong point). The basic tonal balance is dead neutral with a slight uptick in the extreme high end, but what was especially impressive was the tightness and depth of the bottom end offering performance I had only heard in closed-back headphones previously. The soundstage was shallow but three dimensional with a great deal of space.

I next cued up Robert Shaw and the Atlanta Symphony Orchestra’s performance of “The Firebird Suite” (“Stravinsky: The Firebird; Borodin: Music from Prince Igor” – 24-bit/96kHz vinyl rip) and I was transported to a box seat in a huge concert hall, the timbre of the instrument true and compelling with each musician etched out before me in their seat on stage. The plucking of the cellos and the contrabass resonated off the distant walls of the theater. As it turned out, to hit the proper impact of the crescendos I had to return to the CMA 800Rs so I left them on for a few days to let them mellow out and resumed my evaluations (it is often best to leave solid-state amps on continually as it can take a long time for them to fully reach operating temperature of all the components). Since I was still running the Pro iDSD in tube mode as a straight DAC this retained the musicality noted above. When supplied with sufficient power (which is 4.5 Watts with the CMA 800 Rs) the HE6se comes across as extremely tight and dynamic.

I switched to the Dekoni HiFiMan HE Series Elite Hybrid pads first as they were the most similar to the originals in appearance and immediately noticed an expansion of the soundstage and a slightly more robust bottom end, not in an artificial sense, but with more weight while listening to the above tracks.

To further explore that feeling of space I put on my favorite Led Zeppelin song “Tangerine” (“Led Zeppelin III” – 24-bit/96kHz) and was not disappointed, Jimmy Page up close and personal providing three tracks of acoustic guitar with Robert Plant slightly behind in a vast auditorium. John Paul Jones and John Bonham adding power to the choruses the bass rich and full the drums tight and impactful, while Jimmy’s slide guitar and electric leads filled in a massive tapestry of sound.

I next tried the HiFiMan HE Series Elite Fenestrated Sheepskin expecting a marked change in tonality and was surprised to find the tonal balance was consistent, with a slight drop in efficiency and commensurate increase in soundstage and low-end extension. I’ll also note that they had a much more luxuriant feel against my ears and head than the previously tested earpads.

Now it seemed time to go the opposite direction and engage maximum isolation with the HiFiMan HE Series Elite Sheepskin pads. Mirroring the Fenestrated Sheepskin, they were notably more efficient with a slightly more intimate soundstage and lighter bass that was yet still expansive and rich.

Figuring this would be the best combo for vocal I selected “The Lion Sleeps Tonight (Wimoweh)” as performed by the a cappella troupe The Nylons (“Seamless” – 16-bit/44.1kHz). The experience was riveting representing the vast soundstage previously noted.

Finally, I finished up by going in a completely different direction with the HiFiMan HE Series Elite Velour. At this point, it was hard to know what to expect as it became clear that Dekoni had the tonal balance of the earpads well in control, though what I suspected might be the case was in fact true. Lovers of the traditional open-back sound of a slightly warm but shallow bottom end and an intimate but immersive soundstage will love this sound. By far the least efficient combination I had to push the amps pretty hard to achieve the necessary excitement for the crescendos of “The Firebird Suite”, conversely, the impact was increased to match the greater output.

Not being a fan of Hip-Hop I played Liz Phair’s “Polyester Bride” (“Whitechocolatspaceegg” – 16/44.1) to take full advantage of the punch of this poppy sound and it was visceral and fun.

The HiFiMan HE6se Planar Magnetic Headphones are the most linear open-back headphones I have heard short of an electrostatic, that coupled with their huge three-dimensional soundstage and deep bass make them well deserving of their reputation as a world-class reference headphone and make their thirsty lust for power and finicky amplifier demands forgivable and worth the effort and expense.

On the other hand, I never realized how much of that amazing presentation was due to the earpads and while the original HiFiMan earpads are no slouch, the Dekoni HiFiMan HE6se Elite Series Earpads greatly upped the game in both sound quality and elegant luxuriance. It was shocking to discover how well the Dekoni earpads retained the essence of the HE6se sonic signature while adding just a little bit more magnificence. Clearly, for my tastes, the HiFiMan HE Series Elite Fenestrated Sheepskin were the top performer in both feel and sound, but I would happily recommend any of the pads tested.

Overall a truly rewarding and enlightening experience and a definite thumbs up for both HiFiMan and Dekoni.

Gary Alan Barker is a writer who has been a member of the Audio Industry since 1978, having acted as technical writer for several high-end audio companies, and been an electronics hobbyist since 1960. He has also been a musician and writer since the mid 1960s.