HEDD Audio – The New and Amazing HEDDphones: Yes, I Spelled that Correctly! 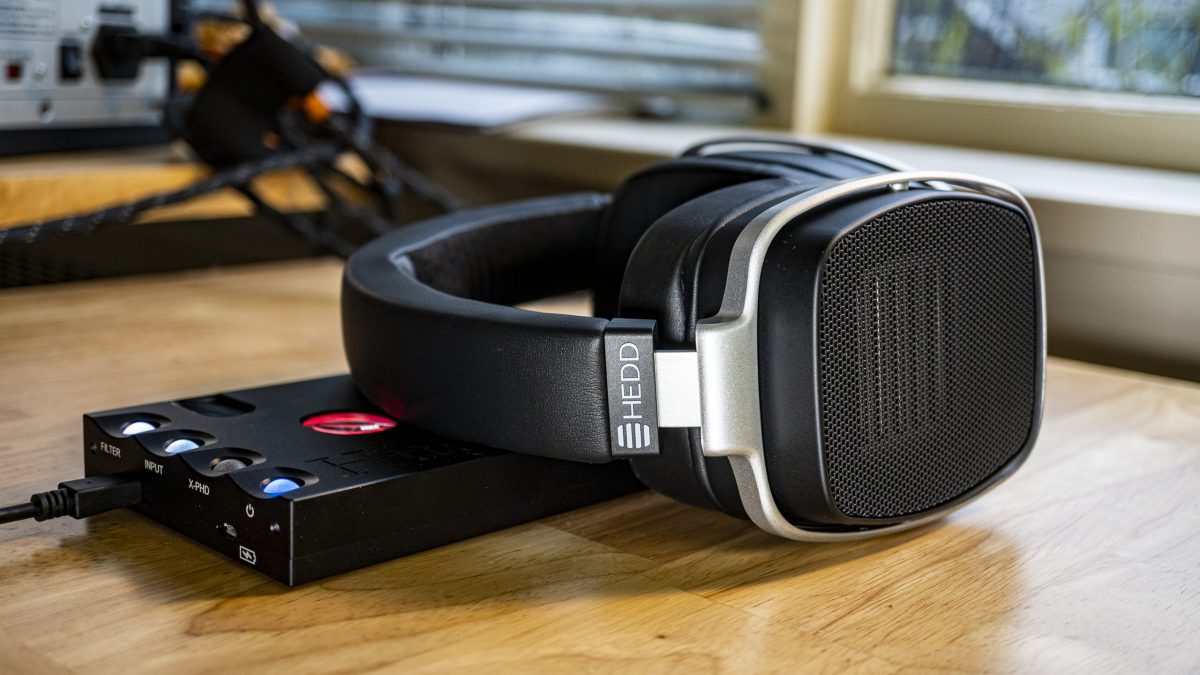 When I first saw their press release in 2019, I was very intrigued by HEDD / Heinz Electrodynamic Designs’ new foray into the world of personal audio – the aptly named HEDDphones. I have previously been a big fan of their studio monitors and found them both very balanced and revealing and I was very curious to see how this incredible transparency translated into a pair of headphones. Using their patented and truly unique AMT (Air Motion Transformer) driver technology, these headphones offer the potential for some of the fastest and cleanest audio drivers around. The AMT drivers are electrodynamic transducers that allow the sound waves to move significantly quicker than common voice coil, orthomagnetic, or even electrostatic drivers. Utilizing folded diaphragms, the AMT drivers can achieve up to four times (4X) the speeds of the previously mentioned technologies. This, in turn, offers the potential to offer previously unheralded gains in transient response and detail retrieval. With 30 years under his belt, HEDD CEO and Chief Engineer, Klaus Heinz designed the world’s first compact and marketable AMT tweeter based on Oskar Heil’s original Air Motion Transformers design. Fast forward to the end of 2019, HEDD released the Series ONE studio monitor line of headphones – The HEDDphone. Due to their focus on a full-range (10 – 40,000Hz) AMT driver technology, HEDD was finally able to take these advancements and put them into their newest creation. So when the opportunity to purchase a pair presented, I jumped on them! A few days after ordering them, thanks to the very speedy shipping and excellent customer service from www.headphones.com, the package arrived safely and securely. As soon as I opened the box, I came to realize that these headphones are B-I-G. I always thought that my Sennheiser HD800S headphone earcups were large, but next to the HEDDphones here, they were no longer the largest in my collection. The larger the size, the greater the surface area and in turn, the more air that the transducers can move, so while not portable in any real way, these headphones offer an incredible opportunity for critical home sessions.

Once I put them on after a few adjustments, I found that while heavy (718g), the weight was evenly distributed across my head due to the headband and earpad designs. Overall I could use them for a few hours at a time with reasonably good comfort. Something I would have been a bit skeptical about given the weight without actually trying them on my own head. I needed to extend the earcups down to their maximum setting in order to get them to go down over my ears and while this was acceptable for me, some with larger heads may have issues. The good news is that the folks at HEDD have listened to their customer’s feedback and have extended this length by roughly 0.5cm to allow them to fit a larger portion of their customers. Headphones shipping in mid-April from HEDD should have this newer headband. However, even with my larger sized head, I found the lengths on my shorter headband just fine for me when fully extended.

The full list of specifications for these beautiful headphones are:

I very quickly learned that these headphones require a good amount of amplification and power to fully hit their stride. Not surprisingly, with an efficiency of 87 dB / mW, these headphones should ideally be driven by an amplifier with 2-5 Watts of power on tap to ensure that these headphones come fully alive and can drive air to speeds that they are fully capable of. I did try them straight out of my Chord DAVE (1.4 Watts) and Chord Hugo 2 (1.05 Watts) and while they sounded quite pleasant, they came alive when I played them through my Benchmark HPA4 desktop headphone amplifier (up to 4 Watts on tap) with the Chord DAVE used as the DAC (using balanced outputs via the Audioquest Water XLR cables).

My first critical session using the system noted previously was with Shelby Lynne’s latest release and self-titled album. I’ve always been a big fan of Shelby’s music, voice and outstanding recording capabilities. I’ve often used her previous albums as test tracks for other reviews due to their incredible detail, depth of sound and overall clarity. Well, with these HEDDphones, this album (streamed through Qobuz) was an experience that left a huge smile on my face. Almost binaural in its portrayal, these headphones along with the Benchmark HPA4 and Chord DAVE put me center-stage with Shelby and her band. I could easily place each player on that stage in very precise locations and Shelby’s outstanding and sultry vocal stylings shone through. These headphones were able to offer such an effortless and completely transparent presentation that they easily put themselves in the class of flagship headphones costing a whopping 2-3 times more! Bass was both deep, taught and very quick. If you are a “bass-head” and love a strong thump like say the Meze Empyrean headphones, I would suggest you look elsewhere, but if you are after a very balanced and neutral sound with incredible definition, then I would suggest you give them a strong consideration. What really jumped out at me was twofold: incredible speed and soundstaging. These headphones are incredibly quick and revealing with some of the very best detail extraction I’ve come across yet! Throw in a soundstage that will give you the illusion of “being there”, they will certainly satisfy even the most critical listener. The three-dimensional soundstaging is both holographic and expansive when you power these headphones properly and give them sources that can extract this detail. The AMT transducers are more than up to the task of pulling out this information from your most demanding recordings and simply transfer you in both time and space to put you in front of your favourite artists.

Next up, I decided to play one of my all-time beloved rock bands: The Tragically Hip. Along with Rush and The Guess Who, The Hip are right there with the greatest Canadian rock bands of all time. Sadly we lost the lead singer Gordon Downie recently, but his music will live on. “Yer Favourites” is the group’s greatest hits album that encompasses all of the very best of their catalogue and I highly recommend you check it out! “Wheat Kings” was absolutely surreal. The initial call of the loons was as if I was no longer in my hometown (Toronto), but rather in the middle of the wilderness with as incredibly real and life-like presentation as I’ve ever heard it. The tonality of this work was spot-on and I was very confident that I was hearing this song as The Hip had intended. Bass again hit hard and quickly, but never lingered more than the recording called out for. The blend into the mid-range was seamless and effortless. What truly grabbed my attention with this recording (along with the expansive sound-staging) was just how coherent and balanced the treble was. Simply put, these headphones offer some of the very best treble extension, detail, shimmer around (regardless of price point) and never once seem strident or harsh. Moving on to “New Orleans is Sinking”, the raw energy of the guitar and bass were perfectly captured by the HEDDphones and had my head bopping up and down within only a few seconds. Gord’s vocals were equally laid bare with such a high level of transparency and clarity that I was thoroughly delighted throughout the track. Simply put these headphones rock!

Finally, I decided to switch to my Chord Hugo 2. This little unit can output over 1 Watt of power into headphones and can be used in both desktop and portable setups. While certainly not up to my Chord DAVE + Benchmark HPA4 setup, this little wonder has pretty much bested any DAC I’ve heard in its price range ($2,495 US). While I had to turn the volume into the purple region, there was still some “headroom” left on the volume that I felt I could drive these headphones quite easily and still avoid any possibility of clipping.  I quickly selected “Pictures at an Exhibition” by Modest Mussorgsky on DSD; a particular classical masterpiece that I often select when reviewing new gear. From the outset of “Promenade”, the lone trumpet appeared out of the black background from what sounded like was the very back of the orchestral stage. This holographic mental image was simply outstandingly real and transported me to the hall when this album was recorded. The ability of these headphones to cast both a wide left-to-right sound stage was equally matched with their ability to cast a deep front-to-back mental image. Being quite neutral and balanced, no single instrument stood out from the other, but all played in perfect unison. I could easily pick out the smallest details with this setup and I have to say that these headphones surpassed the beyerdynamic T1, AKG K812, and Sennheiser HD800S in the overall experience. All three are outstandingly good headphones in the sub-$2,000 USD price range, but if I had to select just one, I would select these new HEDDphones. Very impressive considering these are the first foray into personal audio by this German speaker manufacturer.

What an outstanding tour de force HEDD Audio has released with these amazing headphones. Yes they are large and on the heavier side and yes, they aren’t cheap, but what you do get is such a transparent and true to life listening experience that they will melt away into the background once you put them on. Compared to other headphones in this price range, they have rocketed towards the top and are nipping at the heels of headphones costing significantly more. After a long day at work, I often look forward to getting home and pulling these beauties over my ears and getting lost in the music. If you are a fan of incredibly revealing, neutral and transparent headphones, I strongly suggest you give these headphones a try! Highly recommended!

By day, I’m a husband, father and professional engineer. But by night, I’m an audiophile and music junkie. Many say that music is food for the soul and nothing works better for me than Led Zeppelin, The Beatles, The Rolling Stones, Rush and Miles Davis. For the past 25 years I’ve been on an audio journey that continues to this day.